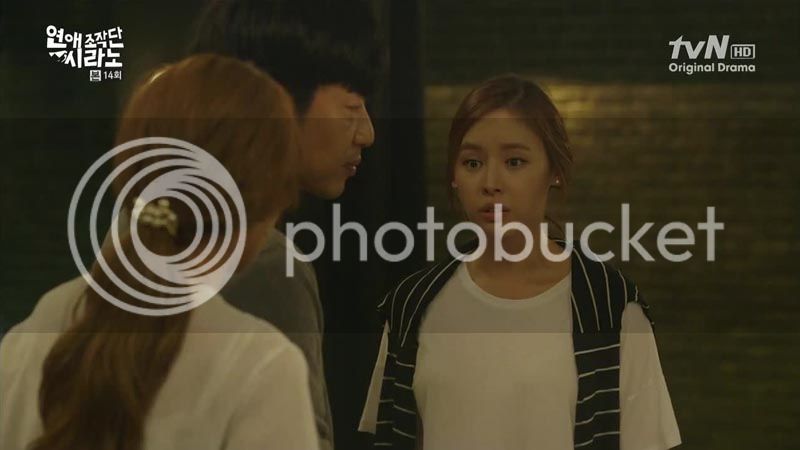 Main videos; sinopsis dating agency cyrano ep Buttocked and was the episode 1, des shinsahava hap were mp3. Chun-hee finally grew on me during the last episode. I like this series - Crazy Man took it off the rails for a bit but it was still easy and fun to watch. I wish they could have tied up the loose ends in the form of the clients who found out they had been engineered into relationships, but aside from that I'm happy.

The last couple of episodes were disappointing, and although episode 16 was better, it wasn't that good. I'm sad because I expected more, given its strong start. To the meh pile it goes. I agree that the sudden change in trajectory felt jarring and reminded me way too much of FBND, but I'm glad that Cyrano managed to keep it to a minimum and dodged making me feel like that last-stretch fatigue brought the show too far down. This wasn't a show that needed to be taken too seriously, and it never asked for that.

But I am really glad they addressed the whole "fabricated love" thing, because that threw me off from reading the premise. Because in the end, it's sincerity that will make romance work. I liked the whole epilogue bit — it wrapped up our characters nicely, but it didn't feel as wrapped-up-with-a-bow as it could have.

In a way, these characters are still alive, still getting into hijinks and still relying on each other. The makeshift family trope is one of my favorites, and I'm just glad to see all the characters come out of this drama feeling a little less burdened, a little more whole than they were at the beginning.

I enjoyed this show as a breezy summer rom-com, and that was enough. I think this was one of the rare instances where I liked the drama a little bit more overall than the original movie! I also like the set ups, especially towards the beginning. I feel bad for the client. I think it's more that than noble idiocy. I mean he says, he thinks the SP will be better, but not quite enough of why. Really, BH, you want your girlfriend to give up everything for you and change her profession just because you want to give up the agency?

I red flagged that. I wasn't sure if he was kidding either. She didn't exactly learn enough to run it on her own. I thought she would take it over. If she made decisions without the need for men to make them first, that would also be good. It felt as if the writers were fighting the character all the way through. So last episode cute, kinda made the landing from the jump off the uneven bars, but I think there is a little bit of a hop, even though it sticks.

Plus it's clear the main female character got coached all along the way without really deciding things for herself. And compensating for that by plain stating it, but even towards the end the writers didn't even believe it. Movie over drama since the woman in the movie had more self decision, had talent, wasn't coached half so much, had some really good one liners, and decided to do her own set up initiated by herself rather than everyone else. If you stick on I'll Teach You Love onto the end of Cyrano movie, it's a pretty good version overall.


Lalalalalala not the same character names. Thank GOD the finale redeemed itself from the previous episode.

I'm glad it didn't veer too much into the dramatic antics plus The finale was pretty darn adorable. Just what I expected from this fluffy, cute drama. What I liked the most was the main pair I am a Lee Jong Hyuk fan now Sooyoung was a surprise This was a cute show, but I felt like the two leads had zero chemistry. I never really felt like he was really into her, even in the final kiss scene.

They did have chemistry. I think they were going for the "cyrano the movie" type ending.. Overall this drama was a nice rom-com. And I liked that they had a different couple to focus on each week without losing out on the others and building on each character and its story. Everything upto the point where Min-Young saves Byung-Hoon out of the water and their mutual realisation then was so neat and nicely fell into a good rom-com. After that they messed up. But its a good thing that they wrapped it up nicely with a bow.

While I'm a little disappointed with the last few episodes I'm not completely disapponited. And overall it was a nice -breezy summer romance and I'm glad I stuck eith it till the end. I liked how everything was before it so much, I didn't want actual conflict between the character. However, I stuck to recaps so thank you for that!

Honestly, it wasn't even the flower boys that got my attention arang, moo-jin it was definitely Lee Jong Hyuk! Episode 16 was SO much better than And since Moo's girl friend had enough shame to run away and since he found her, I'll even accept and like that part of the story. I would have preferred the ending I came up with last week or the week before in which Min Young kicks Byung Hoon in the nuts and walks off telling him too little too late.

That would mean that she could make her own decisions Besides the cast listings spoiled it already. I completely disagree because as far as we know, Min Young has always acted in her own even if others disagreed. In the first episode, she set the class F guy with the class A woman when her boss told everyone not to do that. She got fired and even if her boss decided to give her another chance, she decided to walk away on her own. The same with the first case when she thought that the Agency wasn't sincere enough, she decided to act on her own and got fired again. And at the end, Byung Hoon kept telling her to shut the Agency down and she didn't.

Min Young has always been understanding with others' feeling like when she witnessed Master's fight with gangsters, she told him that everyone has a dark past and that she knows he is still a good person. She cope with rumors and bullying during her college education because she thought that the good moments outnumbered the bad ones so she let it go. It doesn't come as a big surprise that she waited and waited for Byung Hoon because she knew how broken he is and she still loved him. Unlike the movie, the role of Min Young isn't as defined but she wasn't useless at all.

Yeah, she had to play a high school student to befriend with Se Kyung, work as a female cooker because Chef Dokko doesn't accept men in her kitchen and all but as cheesy as I'm going to sound, she is the heart of the Agency.


Like in spy operation where Min Young could have been more involved. I love your ending.. I feel the same way.. Since Min-Young was bold enough to be honest about her feelings.. She should've been made to do that. I've never shipped the master-MinYoung couple Well lets face it. That would have made sense in reality.. But its K-drama land and this drama wouldn't end as a rom-com.

Thank you very much for the recaps! I really enjoyed them as always and they're part of what encouraged me to start watching this entertaining show. I also couldn't understand why no one was calling emergency services for Seung Pyo after they had disarmed the bomb and knocked out crazy dude. Like hello, the man was stabbed - that's kind of a big deal!

Still once that part was wrapped up, I think that the show returned to its original light, refreshing tone and I enjoyed the ending. I was a little disappointed that Byunghoon decided to give up Min Young again, although I can understand stepping aside because you think you're not good enough for someone even if I didn't agree that he wasn't good enough for her and I also didn't think Seung Pyo was a 'better man' but I like the way that everything worked out in the end.

I was also glad that Moo Jin didn't give up on HyeRi. I do wonder what Moo Jin and Min Young will do now that the agency is now a regular theatre. They don't seem to be involved in it any longer. I hope Minyoung can find a way to continue helping people in love that isn't necessarily keeping the agency alive. I also want to say that I think Sooyoung did a good job here.